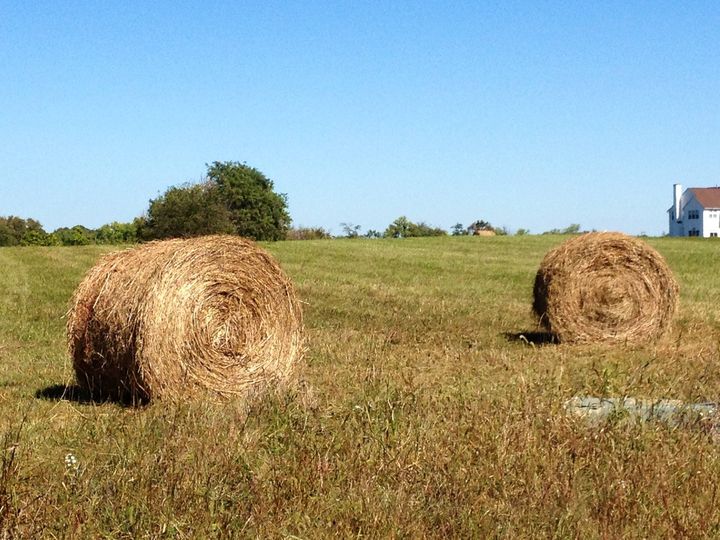 While crossing a bridge over the Shenandoah River in West Virginia, I felt a John Denver song coming on… “Almost heaven, West Virginia, Blue Ridge Mountains, Shenandoah River…” My mother and I were traversing country roads to get a feel for the countryside – the beautiful Blue Ridge Mountains, as well as the yawning golden fields of the valleys. Most of our exploration was confined to Jefferson County, but we did stray across the county line once or twice.

Some of the valleys were dotted with hay rolls. That’s right. While we bale our hay curt and rectangular – they roll it in a highly picturesque manner. This creates a soft landscape, especially when the fields stretch on and on with no fences to bind them. Yellow butterflies flitted and twirled about. It was “almost heaven” with the sweet scent of hay and the endless blue skies.

That is where I first heard the cicadas. At first, I thought they were crickets, but it was daylight and I was puzzled as to why they were singing so loudly. There must have been millions of them – out of sight – hiding in the hay fields. They sang and sang and sang – until we were out of range.

Charles Town, West Virginia is 40 miles from Dulles Airport, but worlds away. The Carriage Inn, our home in Charles Town, is a stately historic mansion lovingly transformed into a bed and breakfast by our gracious hosts Donn and Marie Davis. Its rich history includes visits from General Robert E. Lee and General “Stonewall” Jackson of the Confederate Army. During the Union occupation of the area, General Philip Sheridan and General Ulysses S. Grant met for strategy meetings in what is now the dining room of the house.

After the war, a Confederate bullet mold was found hidden under one of the hearths, and a Confederate flag under another. (The flag is now in a museum.) If the flag had been discovered by General Grant during his visit, historians surmise that the house would have been burned. We stayed in the Shenandoah Suite, which afforded a comforting view of green lawns and towering trees. Breakfast at the Carriage Inn gives one the feeling of being a guest at a Southern plantation. I could imagine Scarlett O’Hara approaching – her green taffeta gown rustling as she enters the elegant dining room. My mother and I – two California Girls – felt like Southern Belles while enjoying cloud-like quiche, luscious fresh fruit, and other culinary delights.

Mother and I visited the place where her great-grandfather, Captain William Bristol, fought for the Union in the Civil War. He camped in the area that is now Harpers Ferry National Historical Park. (We know this because we have copies of letters he wrote describing the area.) Harpers Ferry is situated in a gap in the Blue Ridge Mountains at the confluence of the Potomac and Shenandoah Rivers.

We sat on a bench overlooking the rivers where three states come together – West Virginia, Maryland, and Virginia. It was peaceful and beautiful. The emerald-hued rivers meandered on, a light breeze tapped the leaves in the trees, and the birds sang sweetly. The cannons on the hill had long been stilled and told nothing of the battles of 1862. My mother and I sat on the bench – in silence – for a very long time. We were both in awe of the fact that her great-grandfather camped here, and fought here, 155 years ago. But, no ghosts of cannon fire shattered our peace that day.

Shepherdstown is a fascinating historical town on the banks of the Potomac River. Rough-hewn stone houses, as well as some brick buildings, line the narrow streets. We were puzzled by a wooden structure situated near the riverbank – it was tall and narrow with a door that opened to absolutely nothing. A step out that door would be fatal. It could have been a pump house, but it remains a mystery to us.

O’Hurley’s General Store, Shepherdstown, is quintessential West Virginia. A cat named Murphy wanders the store and perches where he pleases. They advertise an eclectic mix of goods, from dinner bells to anvils to frogs. Knowing this, we took our time. We didn’t just browse a bit and then go on with our day, no, we took our time to explore all the nooks and crannies. We found tools, crockery, nails, but not one frog.

O’Hurley’s is like a museum – even the toilet was photo-worthy. My mother wanted a photo because it resembled the toilet at the family ranch house where she was raised. It was wooden with a high wooden tank and a flushing chain. Yes, a finer, more picturesque toilet was never seen.

Lunch at Shepherdstown’s Blue Moon Café was marvelous. The trickle of the meandering stream welcomed us to the tree-shaded courtyard dining area. An imposing large-leafed paulownia tree bent over the patio, and tiny sparrows hopped nervously from one branch to the other. In the shadow of the trees, we sipped our “sweet tea,” (an amazing Southern elixir), and enjoyed our sandwiches. The Gobbler was a delicious choice. It was served on a Kaiser roll stuffed with turkey and bacon, then drizzled with Russian dressing. Melted provolone cheese crowned the delicious concoction. The mingling of scents – the stream, flowers, sweet tea, and delicious aromas from the kitchen, swirled into one fragrant whiff of the South.

Yes, West Virginia is far and away, and there are probably few in our area who have even thought of making it a travel destination, but it is a delightful experience, especially for those interested in the Civil War era. It’s also a fairly seamless trip from San Diego. Southwest Airlines offers flights to Washington Dulles International Airport with only one plane change.

When it came time to leave the cannons and cicadas and sweet tea, we passed the last remnant of our encounter with the captivating Southern culture…Frying Pan Road.