A Tale of Two Chinatowns: San Francisco and Toronto

Python skin-layered musical instruments, jujube mooncakes, and pagoda-style roofs – all this can be found in China. However, when venturing beyond the edge of the ordinary –  a little closer to home – I seek out the boldly eclectic Chinatown neighborhoods of San Francisco, California and Toronto, Ontario.

What is the lure of these two neighborhoods that share a common spirit? It’s the thrill of a frenzied pace of life as residents brush and jostle each other on narrow, and often uneven, walkways. It’s the fascination of the Chinese culture that has arisen in these cities – a culture that is neither faux nor contrived, but has emerged from the residents’ earnest desire to live life enhanced by the cuisine, architecture, and trappings of their distant civilization.

These two boroughs are singing centers of life for the residents, which makes them intriguing destinations for visitors.

Elderly men sit at street corners playing ancient-looking stringed instruments. Shops are crowded with wares, some of it kitschy, some authentic. It’s all meshed into two captivating and inspiring entities – each called Chinatown.

The Dragon Gate on Grant Avenue heralds the entrance to Chinatown San Francisco with a roar of color. This neighborhood, established in the 1840s, is purported to be the largest Chinese community outside of Asia.

At first glance, the area might seem like a mishmash, but there are layers to uncover, and each layer has its own appeal. Look high for green pagoda-style roofs and streetlamps circled with metal dragons. Lower your gaze a bit to see flashes of neon signs and walls emblazoned with red Chinese characters.

The elaborate Grant Avenue window displays encourage loitering. Some store windows are so crammed with art objects that it would take an hour to see every detail. Other windows have just one piece as the focal point – such as a jade dragon with lustrous curves, or a pretentiously carved elephant tusk.

The aromas that emerge from the conglomeration of markets lend an earthy luster to the air. Sunlight sifting between high buildings is somehow softened as it flows to the street.

There is a noticeable predominance of the color red. To the Chinese, red symbolizes good luck and prosperity. A string of red lanterns across Grant Avenue wag their tassels in the breeze. Red paper banners bursting with gold Chinese characters welcome patrons to restaurants and shops.

Tablecloths, rice bowls, tea cups and silk brocade jackets are abundant and reasonably priced – but shopping could get a bit tedious as many of the same items exist in shop after shop.

However, before your shoe leather wears out I am sure that you will eventually discover something unique. At Old Shanghai on Grant Avenue I found vintage carved wooden plaques that were probably once part of a door or cabinet.

I never pass up the Far East Café where several generations of my family have dined for 90 years, enjoying the exotic air of this Grant Avenue landmark which opened its doors in 1920. The café retains historical ambiance with faded 100-year-old paintings and intricately carved light fixtures. The curtained mahogany booths, where up to five can dine in privacy, still carry an aura of mystery. I always expect James Bond to emerge from behind the red velvet curtains at any moment!

Sitting with friends in one of the mahogany booths, I selected the Mu Shu Pork, which is a delectable taste swirl of tender shredded pork, fluffy eggs, black mushrooms and bamboo shoots. My friends chose the Dim Sum platter and we happily shared.

After lunch we enjoyed mooncakes at the Far Eastern Bakery. These desserts are filled with jjujube (date) paste and provided a sweet finale to our savory meal. The less adventurous can’t go wrong with the bakery’s traditional almond biscuits. None of the labels are in English, so, practice makes perfect, and the point and sample method usually works… at least for me.

As night fell and cable car clangs resonated through Chinatown, the mist began to creep up from the bay like a silent dragon, edging through alleyways and around lampposts. I inhaled Chinatown’s intense scents, trying very hard to isolate, identify, and then memorize them.

On this July visit, it was over 100 degrees, steamy, and an unusually hot temperature for Toronto. But, I was on a mission to experience Chinatown, so I had the taxi driver drop me off at the intersection of Dundas Street West and Spadina Avenue, Chinatown’s hub. Armed with my water bottle, I wove a path in and out of semi-air-conditioned shops.

Toronto Chinatown’s buildings are not as old nor as ornate as San Francisco’s, even though the community was established in 1878 when one of the first Chinese immigrants set up a laundry. However, colorful evidence of Chinese culture is still to be discovered – down the narrow alleys, I found a fish market, herb specialist, and a market with rows of bins crammed with mostly unfamiliar vegetables.

In Toronto, the color red is not as prevalent as in San Francisco. Pagoda-style roofs are also more difficult to find. Because I had come to equate both with Chinatown, it was necessary to refocus a bit in order to uncover the spokes of this neighborhood’s cultural wheel.

A street vendor peddling a wonderful drink made from sugar cane juice was a welcome sight, and something I had not experienced in San Francisco. The kiosk was framed by rows of sugar cane – like a jungle in the midst of the city. If you have ever chewed on a piece of sugarcane – this drink had the same flavor – sweet and refreshing.

Bakeries were small and looked to be family-owned. Most of the pastries were listed in Chinese, so it was a gamble, but also a taste adventure. Fortunately, everything I chose came in varying degrees of delicious, but one warning – don’t come with any preconceived notions of taste sensations.

I ordered a round, rather benign-looking bun in a Dundas Street bakery, then bit into something hard and black that tasted vaguely like fruit. After I overcame the initial texture shock, I rather enjoyed the taste. In the glass case, a pastry with a faint lavender hue caught my eye. I thought it might be a lotus seed bun, but couldn’t prove it by the label, which was written in Chinese. The pastel lavender was quite alluring and the delicate sweet flavor made the pastry even more seductive.

Toronto has fewer shops than San Francisco, however, the stores are more specialized, and the same items are not repeated over and over. Navigating narrow aisles of the Dundas Street shops was a bit like negotiating an obstacle course, but the effort was worth it. I was pleased to find brocade silk purses, a small hand-painted drum, and jade chopsticks.

After my shopping spree, I began to think it was not only time for lunch, but also time to seek an air-conditioned refuge. Roasted ducks hanging in windows have been, to me, a sign of authentic Chinese food, so when I saw the ducks drooping in the window of the House of Gourmet I knew I had come to the right place.

The hostess took one look at me, rattled off something in Chinese, then led me to a table with other solo diners. Scanning the room, I seemed to be the only tourist around – a good sign. Seated next to me was another non-Chinese – a local businessman who was fluent in both Cantonese and English. Across the table sat an elderly Chinese man and a Chinese woman about fifty.

I chose the tame Sliced Beef Fried Rice as I needed some comfort food after battling the heat. The beef was tender and the rice was enhanced by scrambled eggs, soft peas, and a hint of ginger.

The businessman who spoke Cantonese turned to me and relayed a message from the Chinese woman across the table. It seemed that she was concerned because they didn’t put enough beef in my rice dish. I smiled and told my “interpreter” to tell her thank you, but it looked just right to me. Very interesting dynamics when you share a table with three strangers, two of whom do not speak English. The elderly Chinese man was quietly enjoying his fried dumplings. I smiled, he smiled, and we were all very happy with our meals – even if mine was a bit thin on the beef, or so said the Chinese woman across the table.

As I wandered down to the corner of Dundas Street West and Spadina Avenue to wait for my taxi, exotic sounds emerged from a deftly played instrument wielded by a frail, elderly Chinese man. The music lent an ethereal aura to the frantic street corner.

His instrument was an “erhu.” Two-stringed and violin-like, it was layered with python skin. The erhu looked well-used, with python scales curling up a bit.

As he drew the ragged horsehair bow across the metal strings, a lovely, lucid flow of music emerged — music that conjured up visions of bamboo rickshaws and placid rice fields. It was the sound of a far-away civilization, but also the same vibrant civilization that became manifest in Toronto over a hundred years ago.”

Because no city ever remains constant, and subsequent visits to these thriving Chinatowns will be a bit different, I attempted to savor each detail of my sojourn to these cultural portals that offer glimpses of a distant and ancient land called China. 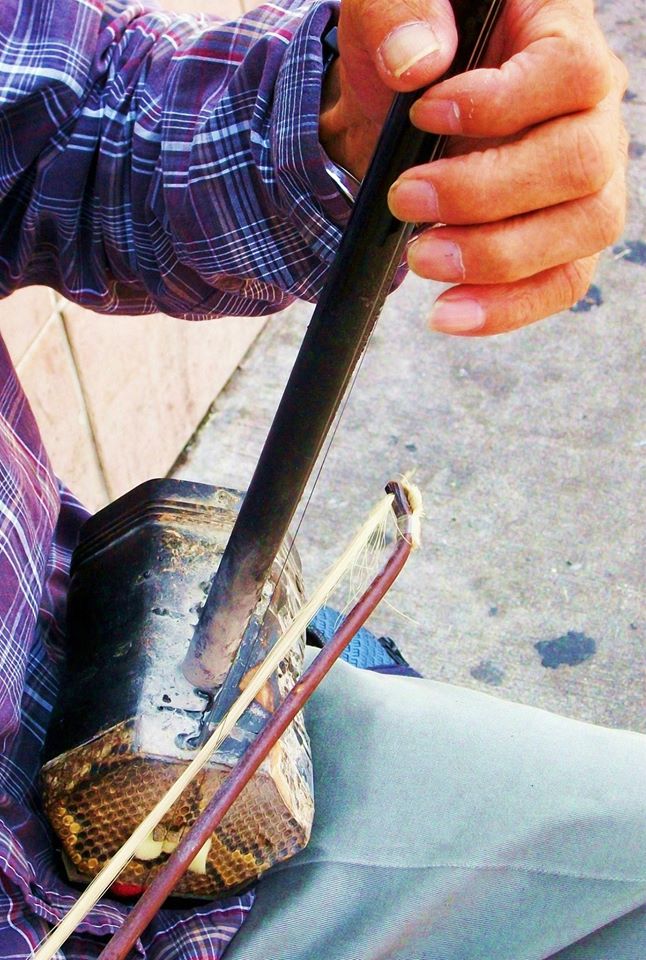